Live From The Underground: Big K.R.I.T Will Perform Tonight at Halftime of the Brooklyn Nets vs. Atlanta Hawks Matchup

Live From The Underground: Big K.R.I.T Will Perform Tonight at Halftime of the Brooklyn Nets vs. Atlanta Hawks Matchup 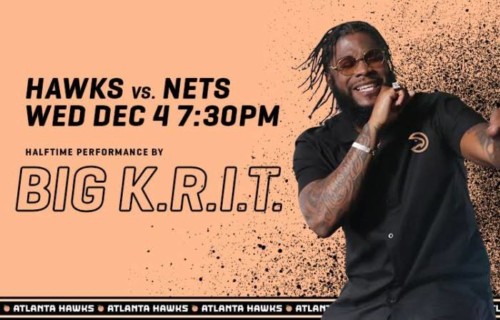 The Atlanta Hawks are set to host their third “Peachtree” night of the season this evening (Dec. 4th) as the Hawks host the Brooklyn Nets. Not only will Hawks fans who come to the game tonight at State Farm Arena get the chance to see a great game, at halftime, Hip-Hop star Big K.R.I.T will perform some of his hits.

Tomorrow’s the night @BIGKRIT brings his energy to the arena! ⚡️ You don’t wanna miss his performance at halftime!

The southern-bred artist has already partnered with the Hawks on their in-arena hype video based on one of his recent hit songs Energy.

“It’s dope to have the Atlanta Hawks feel that the spirit of my song reflects the direction and energy of the new team,” said Big K.R.I.T. “I’m looking forward to bringing that vibe off the screen and live to center court at State Farm Arena.”

The pre-game video of the Hawks remix of Energy was produced by the award-winning Hawks Studios and is a vibrant combination of Hawks game highlights and Big K.R.I.T. performing under the arena’s massive continuous centerhung videoboard. View the entire video, which is played before the start of every Hawks home game, here. The BET Hip Hop Awards nominee’s latest album, K.R.I.T. Iz Here, was released in July of this year and features the original version of Energy. He has most recently released a new single, My Sub Pt. V (Ballad of the Bass), a continuation to his well-known and revered My Sub Series.

The Hawks tip off against the Nets tonight at 7:30 p.m. To secure tickets or pre-order the Peachtree jerseys which are available now, visit hawks.com/Peachtree.  Follow @eldorado2452 on Twitter and Instagram for all your Atlanta Hawks, NBA and sports news.